The Winning Team U18 Girls

Congratulations U12 Girls Finalists May26

Having passed the halfway mark most teams are still in with a reasonable chance of a playoff spot. Week 3 (Friday May 24th and Saturday 25th) saw three wins and three defeats across Donnybrook's six teams.

Donnybrook 1 remain top of their pool after only dropping one set on the way to a 5-0 win away to Sandycove. After the win, Andrew Kirwan claimed to have hit the shot of the year in his doubles match but this is yet to be confirmed as we can't find anyone else to back up his claim...watch this space.

A tough away fixture to Newtown Park's #1 team. Well done to David Pall who made his league debut for the club and secured an important point at singles 2.

A very close tie where all but one match went to a third set. With Andrew Cloonan absent due to his attendance at the Spice Girls concert, Martin Henihan stepped in and gave his very accomplished opponent a good run. Claremount are running away with this pool so Donnybrook's week 4 match versus Mount Pleasant 2 will go a long way to deciding who makes the playoffs.

Another tight fixture which this team have come out the wrong side of. However, securing two points again this week has helped our chances of making the playoffs - we currently sit joint second in this pool with two round to go.

An emphatic straight sets win. Team 6 are heavy favourites to proceed to the playoffs as they sit top of their pool with only one match dropped in three fixtures.

Despite two narrow losses Team 6 are still in with a shout of the playoffs thanks to their doubles partnerships securing  two points this week.

After a strong start to the campaign in week 1, progress is steady this week with three wins and two defeats. Team 6 had no match this week so we had five men's teams taking to the court on Friday 17th and Saturday 18th.

Another 4-1 win for our top team. Donnybrook 1 are now sitting top of their pool after two weeks with 8 points.

Another mirror of last week's result. Donnybrook 2 are sitting second in their pool with 6 points now.

A tough week for Team 3. A very impressive Claremont 2 team took this tie comprehensively against a team weakened by a couple of last-minute injuries. This group still very open however - Donnybrook are only two points off 2nd place in the table.

Co Wiclow held their nerve to come out on top in a fixture that went right down to the wire. Donnybrook's singles two and singles three both lost in third set tie breakers. Mark Cloonan's strong finish ensured Donnybrook 4 left with two points and stay second in their pool.

The difference-maker in this tie was Claudio Viotti. With four matches finished and players already tucking into the post-match sandwiches, 'The Italian Stallion' lived up to his nickname by taking his opponent in the third set after a gruelling 2 hour 30 minute match. This leaves Team 5 sitting top of their pool with 9 points.

Donnybroook LTC is having an OPEN DAY on Sunday 26 May from 11am to 4pm. 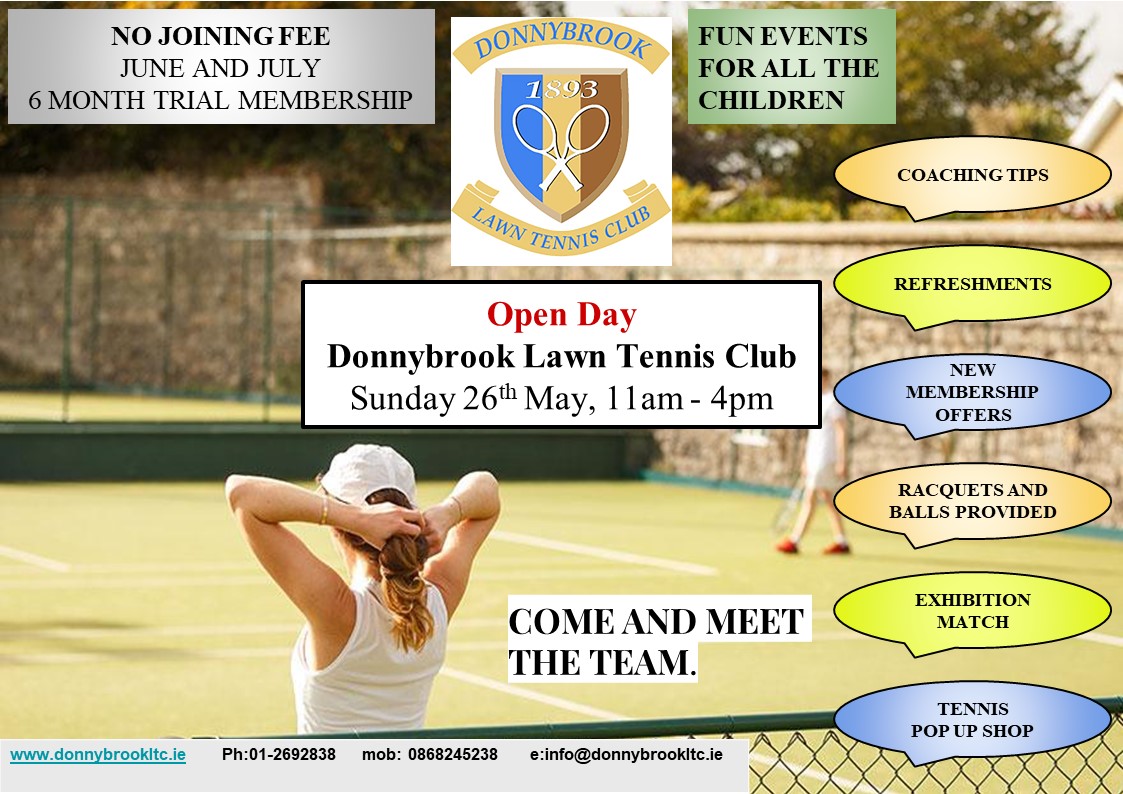 Run by the Dublin Lawn Tennis Council, the Men’s Summer League kicked off on Friday May 10th.

The men’s summer league will run throughout May and June with group matches played on Friday nights and all day Saturday. This year Donnybrook had a very strong panel of gentlemen getting involved – the club fielded six teams spanning Class 2 to Class 7.

A strong start to the competition saw the club finish the first weekend with 5 wins from 6 fixtures, taking 22 points from a possible 30.

Captained by Andrew Kirwan, Team 1 came away with a 4-1 win in Fitzwilliam. Owen Casey’s invaluable experience and some great young talent mean this team is shaping up to have good campaign.

The undoubted star of the show here was 14 year old Frank Fagan. With the tie locked at 2-2 Fagan clinched it for Donnybrook by taking the third set of his match in style as his teammates looked on. Playing against a very experienced opponent, his ability to hit winners and dominate points was particularly impressive given this was his Senior League debut.

Singles got us over the line here. Large clubs like Malahide often have resilient, experienced doubles partnerships and this was evident as Donnybook came out second best in both doubles but won all three singles matches.

Captain Andrew Synnott lead the way here by only dropping two games in a straight-sets win with double partner Peter Morgan. The team followed his lead by recording a 5-0 win and getting home in plenty of time for the Heineken Cup Final – an obvious incentive to play aggressive tennis this week!

The League Training Programme which ran throughout March and April for class 4-7 players has been a big factor in players hitting the ground running. Another 5-0 win here with all players recording straight-sets wins. Well done and thanks to Peter Morgan and Darragh Connaghton for organising the coaching with Owen Casey and Jimmy McDonogh.

With a raft of last-minute injuries and challenging availability this week, Team 6 lost their tie but did secure two points which could come in valuable later in the campaign. Special thanks to Conor McAuliffe and Peter Clarke for stepping in late in the day as subs. 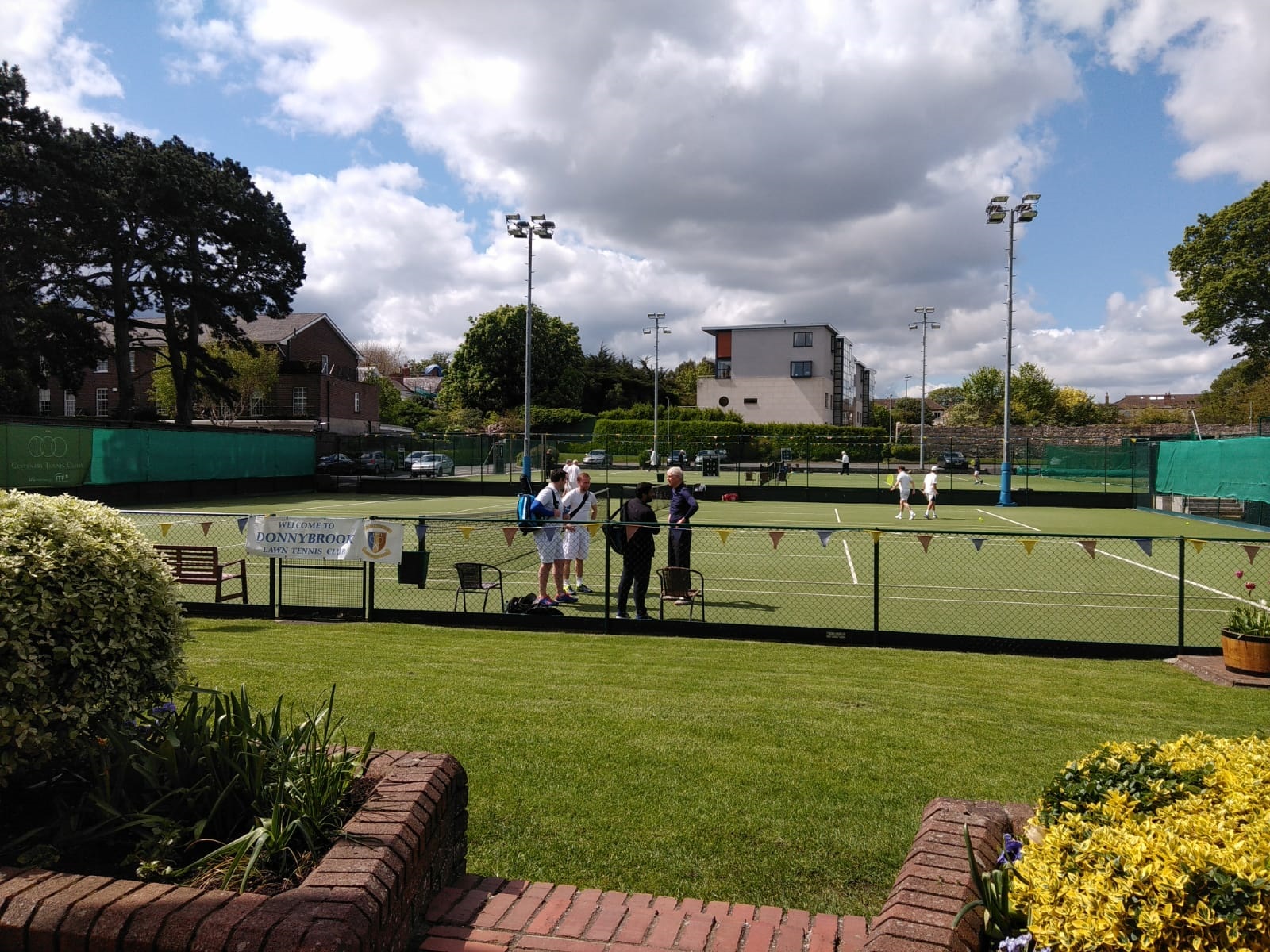 U12 Family Day and BBQ

U12 FAMILY DAY (Members only)

Donnybrook LTC’s special presentation
TENNIS
 This email address is being protected from spambots. You need JavaScript enabled to view it.
A LARGE crowd turned up at
Donnybrook Lawn Tennis Club
last week to welcome Minister
Eoghan Murphy to the club for a
special presentation day.
For the past five years, Donnybrook
has been offering tennis
coaching to adults and children
with an intellectual disability and
Murphy presented performance
certificates and an Easter egg to
each athlete.
A Special Needs programme,
now known as Enjoy Tennis, is
organised through Tennis Ireland
and has proven very popular,
attracting over 20 athletes from
all over Dublin every Sunday
morning.
The Minister witnessed the
popularity of the programme and
gave words of encouragement to
the family members and athletes
who had braved the unseasonal
weather to improve their tennis
skills.
Conor Niland, former Irish
number one and Davis Cup player,
also participated and joined the
coaching staff, club members and
Transition Year students on court,
displaying his skills.
After a photograph with the
BIG DUBLIN RIVALRY
Minister, everyone returned to
the club where Aisling Drummy,
a Leinster Tennis Council Representative
and David Clarke,
who coordinates the programme
within Donnybrook Lawn Tennis
Club, thanked the Minister
for attending one of the highlights
of the Enjoy Tennis programme. The Association of Centenary Tennis Clubs (CTC) is an umbrella group of clubs more than 100 years old, including some of the most prestigious clubs in the sport. Initially founded by eight clubs as a pan-European association, the group now have an extensive and truly global membership and are recognised by the International Tennis Federation (ITF). All member clubs have a history dating back at least one hundred years, with a significant sporting tradition and social role.

Congratulations to the panel of players who won the Class 5 Ladies Winter League Final on 31 March 2019.

Donnybrook hosted the Finals and our esteemed President, Chanelle, attended the event, supported the team and contributed to the speeches.

Touching shoulders with the stars

In June, July and August 2019, Donnybrook Lawn Tennis Club is running a Summer Programme of Afternoon Activities aimed at Juniors aged 5-14. It starts with supervised lunch from 1-2 followed by a range of sports and activities from 2-4pm. These activities will include, but are not limited to, tennis practice, tournament preparation, table tennis, ball games, running games, footwork and co-ordination games, rip tag, hoola hoops, parachute games, tennis rounders, team challenge games, speed stacking, etc.
The Junior Steward will also assist in the day to day running of the Junior Open and the Junior Club Championships.
The aim is to provide an enriching, inclusive and welcoming environment, full of fun, where children can try a range of sports and activities, including but not limited to tennis. Most importantly, we want children to enjoy their time in Donnybrook Lawn Tennis Club and get to know other Juniors.
Donnybrook Lawn Tennis Club is now seeking an outgoing, enthusiastic, and committed individual to establish and manage this Programme of Afternoon Activities in order to ensure a positive DLTC experience for all participating Juniors. The Junior Steward will work in conjunction with, and be supported by, our Junior Committee.
Key requirements of the Junior Steward role: 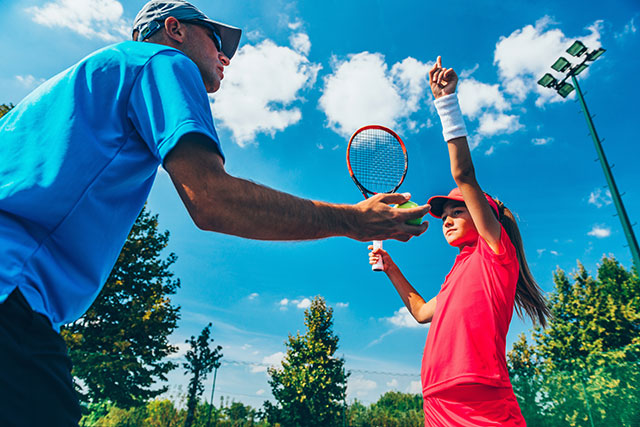 WISHING THE U14 STARS 'n STRIPES TEAM the very best of luck in their FINAL,
Saturday 9th March, 5pm in Rathgar.   All supporters welcome.

There was standing room only as Donnybrook members packed out the clubhouse for the Annual General Meeting on Thursday February 28th.

On behalf of Donnybrook LTC we would like to congratulate Juliana Carton who has been selected for the Irish Federation Cup team who will compete in Montenegro w/c 15/04/19. Donnybrook send congratulations to her parents Anita and Michael Carton long time members of Donnybrook, and also congratulate her coach Owen Casey.